Waking up at 6am on a sunday during holidays, what a fucking idea. Oops, my bad: it was monday this time. Again, I spent my time yawning in the subway and at the train station. My backpack felt lighter, though: getting rid of the tent was a good idea. And again, I made my way to my seat and napped during most of the journey to Bayonne. 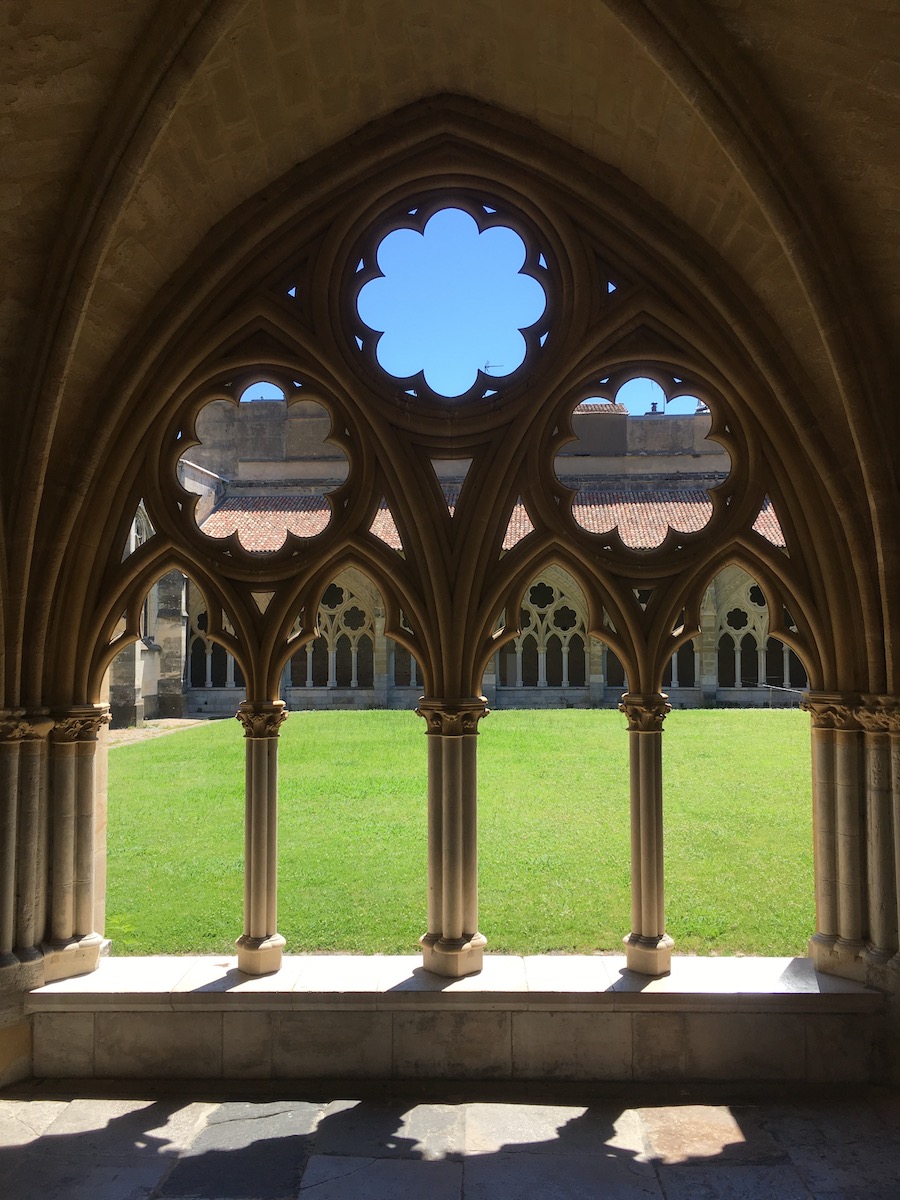 When I was planning these three weeks, I had discarded doing another camino since I had already done one only a few months earlier, but mostly because I would not have the time to walk it until the end. I had thought about it again shortly before leaving Krista, and it struck me that actually, I had not walked the whole thing: I did not go to Finisterra, and neither did I walk the first few days of the Camino Francés.

With Loïc, we had walked on the Camino Aragonés which joins the Francés in Puente-La-Reina; but there was a few days of walk between the start of the Francés in Saint-Jean-Pied-de-Port and PLR. There was my new plan: go to SJPP and start walking.

I had zero intention of making any further plans. I knew where I was going to start and that was all I needed to know; everything else could be improvised — no maps or guidebook required. And so I went to Bayonne and enjoyed the city in spite of the heatwave for a couple of hours before catching my train to SJPP.

A tiny disclaimer: for reasons unknown — ok, it's laziness mixed with procrastination — I started writing this mid july (up to a draft of the second paragraph) and went back to finish it in october. Obviously, my memory is not as fresh as it should have been, and as a result some events might have gotten mixed up. That'll teach me... Hopefully.

I ran into a few pilgrims right away, all waiting for the same train. Americans, French, a few Asians, people from all around the globe. During the trip, I sympathized with the few young ones, including Dan and Sam (USA). Once in the city, we each went to out respective accomodation but met quickly for a round of beers with another pilgrim, Joel (Macau). With the heatwave still going on, those were hitting quite hard… Right after, I went around to visit the city: the citadel at the top of the hill gives a pretty great view over the looming mountains we were going the face the day after. 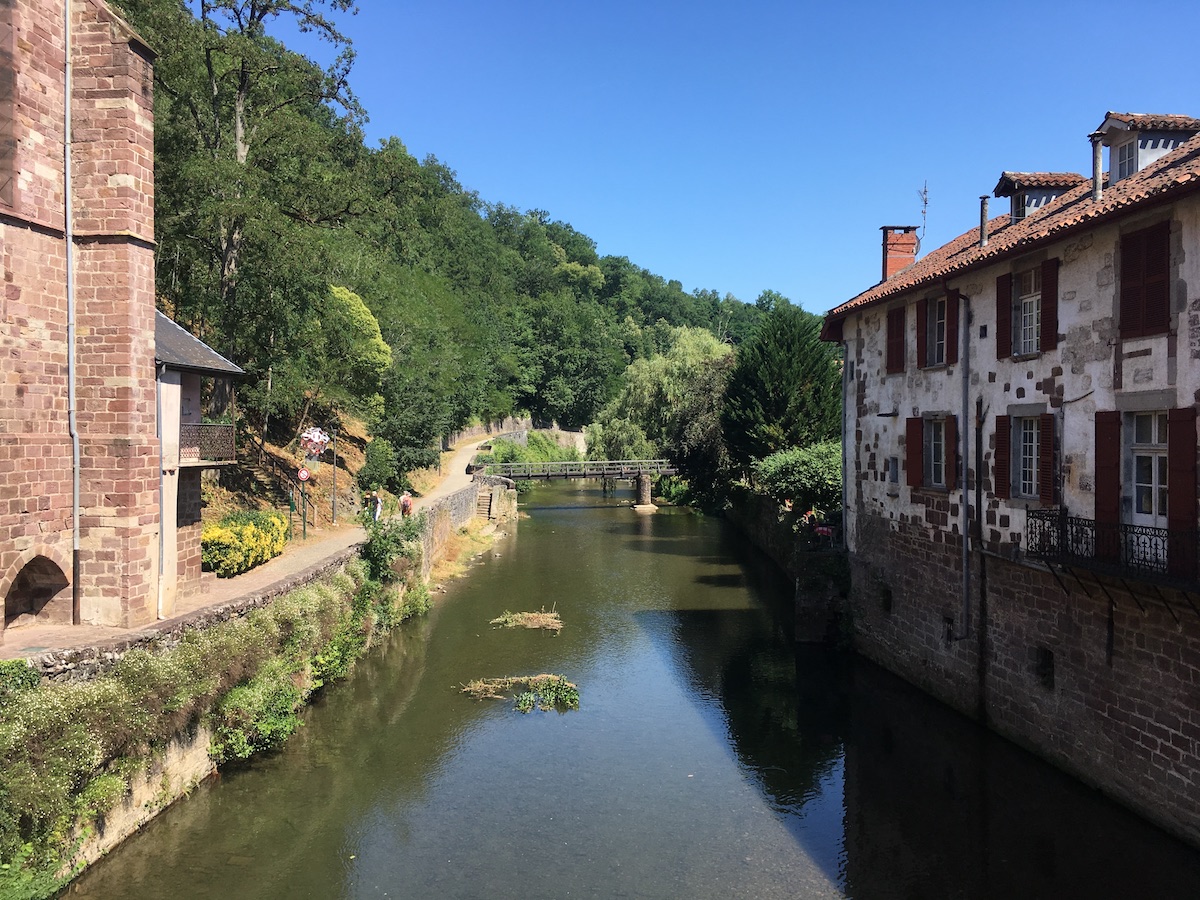 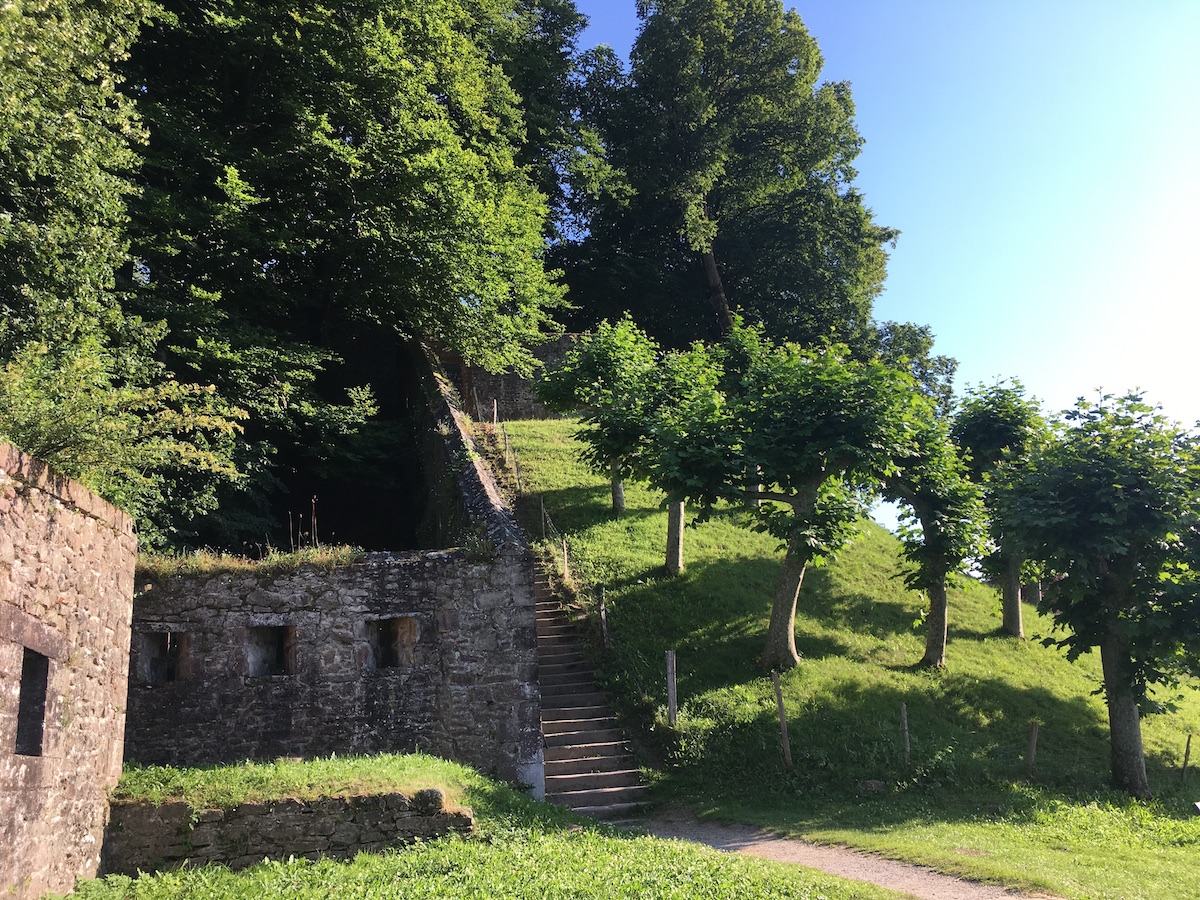 At 5:30am the next day, people started waking up, and I was leaving the albergue before 6:30. This was way earlier than what I was used to during my first camino, but it made sense: the days were as long as they could get and very hot, so better leave early and walk as much as possible before midday. 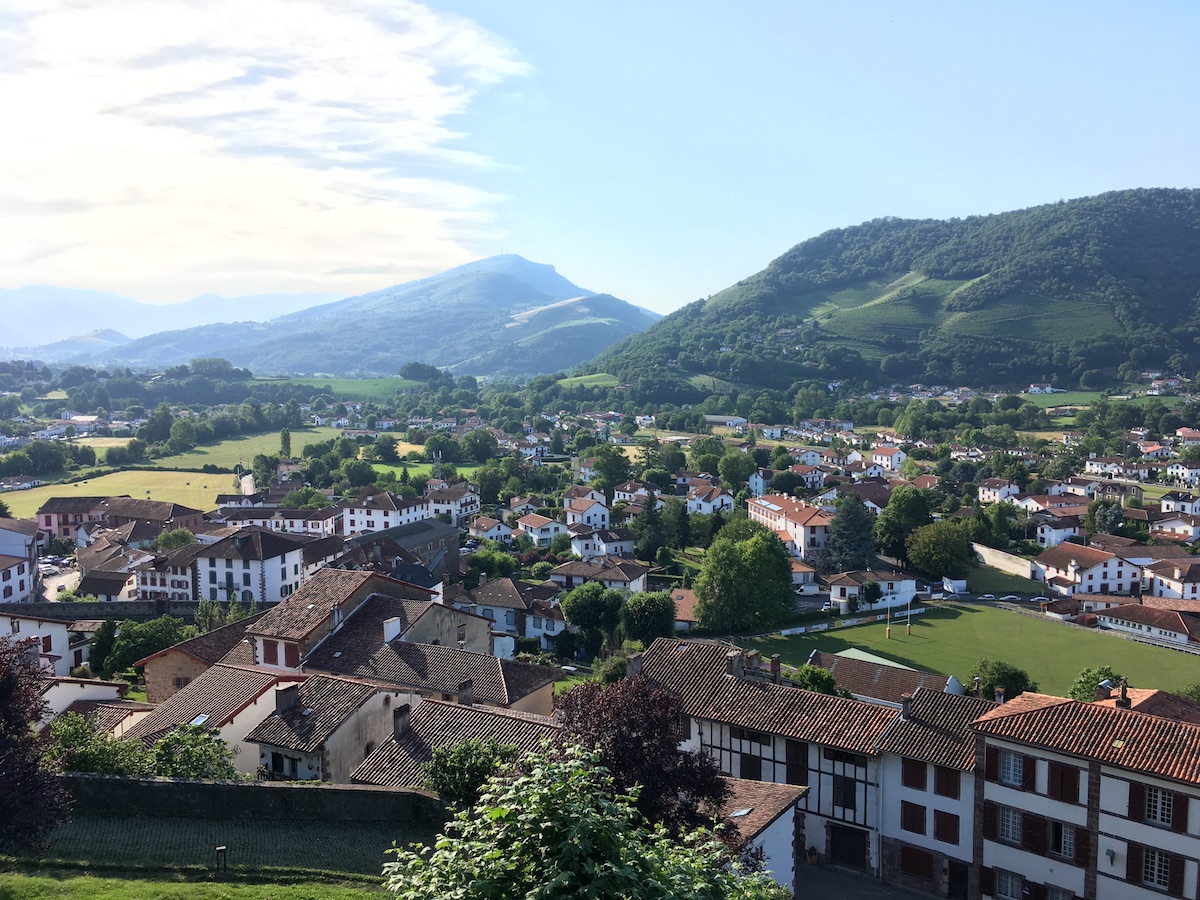 The stage between SJPP and Roncesvalles is known for being one of the most challenging since many pilgrims are facing it on their first day. I had done worse during the first camino and I had one week-ish of hiking behind me, so I was confident about it; but I still had a hard time for the first half of the way. The path was very steep and I had to stop and catch my breath often. After that, I managed to drag my old self to the albergue at Roncesvalles around 1:30.

I walked most (if not all) of the way with Lindsey (Michigan) and Tatiana (Italy), then caught up with Sam, Dan and Joel, and started settling into our post-walk rythm: beers then dinner! That’s when my lack of planning caught up with me: I didn’t have enough cash and there was no place to withdraw in that tiny village. Luckily for me, Patricia (Denmark) was nice enough to lend me some money to last until the next day. The day and early evening were spent drinking beers, enjoying tapas, and getting to know each other, until it was time to try to get some rest among the snorers.

Can you please pass the wine ?

This time again, people got up pretty early, around 5am. I did not have a good night and was not happy being waken up so soon, so I decided to put on some music and walk until I found a place to grab coffee, with as minimal interactions as I could get away with.

Later, I found Sam in company of Aline, a fellow french, and Claudia (Australia) who had also done a camino previously, though a few years earlier and in different circumstances. We ended up in Larrasoana around 2pm and met Bob there, whom at first reminded me of Paul from my previous camino, but had very little in common. 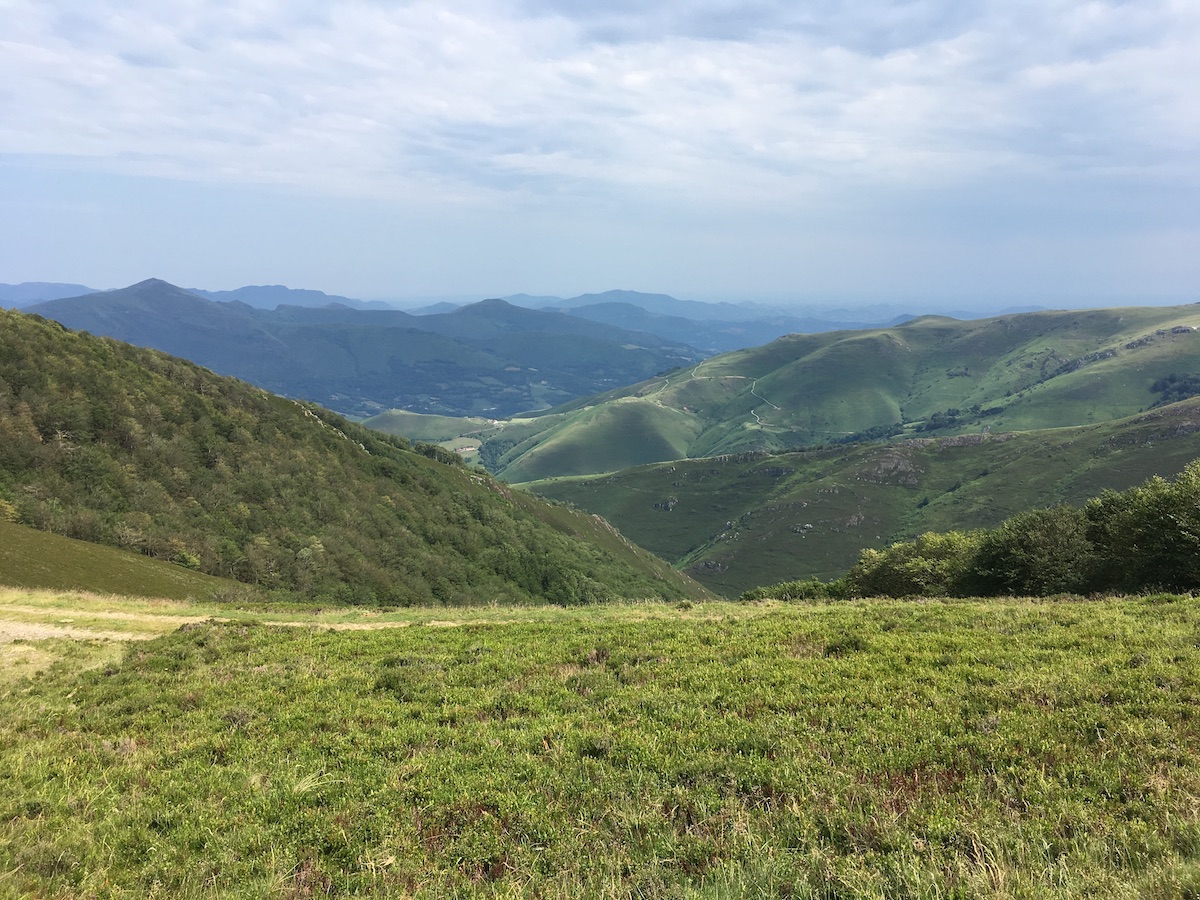 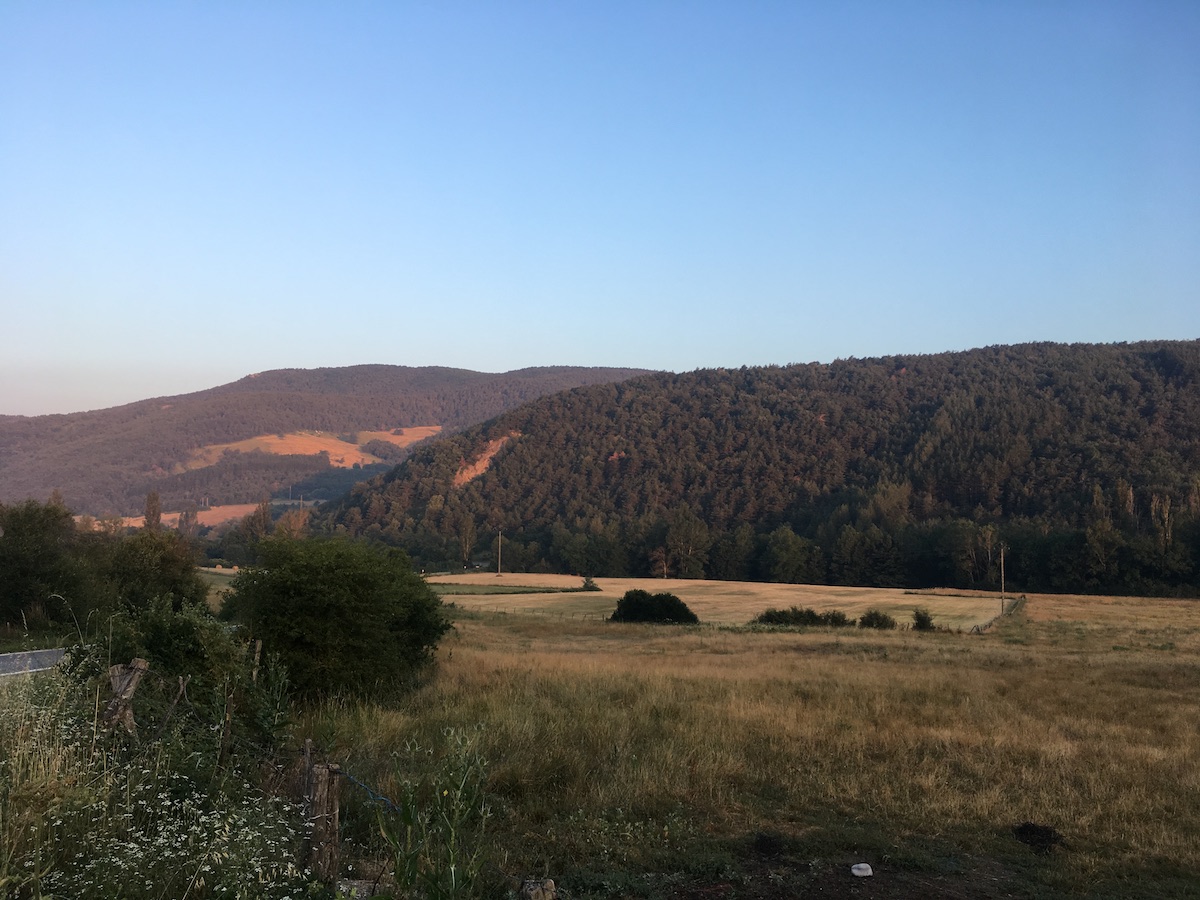 I was in a weird spot regarding him: on the one hand, he kept helping me and proving me with creams and medecine for the various bug bites I started to notice over my arms, but at the same time he was making lewd and unpleasant comments at some of the girls. I was not the only one feeling a bit uncomfortable around him, which made it easier to avoid him the next days.

Not surprinsingly, we spent the afternoon drinking, talking and resting. A group of italians volunteered to cook dinner, which was the occasion to drink some more and to stir up some debate revolving around beliefs and the decent etiquette of wine sharing. I wonder what the camino would look like without the beer, wine and coffee… I’d have to found other topics to talk about, for sure.

Still earlier: this time the first ones got up around 4am. I tried to stay in bed as long as I could, but around 5am I was too awake anyway. I walked with what had become my group - Sam, Claudia, Dan, Patricia and Aline - but wasn’t yet in the mood for talking, once again needing a coffee. We finally found one and soon after entered Pamplona. We ate a late breakfast (or early lunch?) consisting of a hybrid between a pizza and a tortilla, which was as awesome as it sounds, then made our way inside the city. 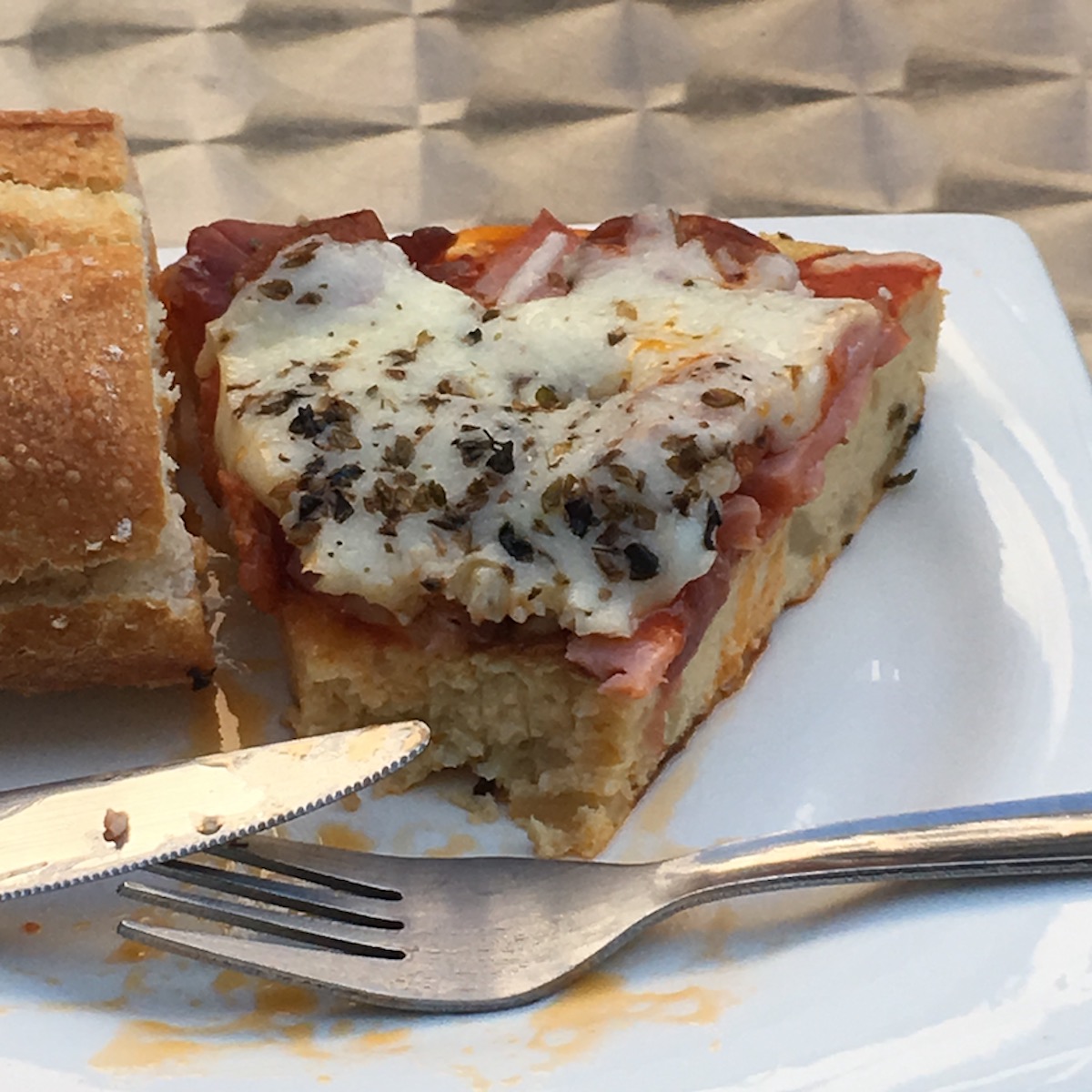 So it took a little more than a couple of days to find myself on known grounds again. Since I had not looked at any maps, I was under the impression that it would last longer but well. We checked into the same german albergue that I was in last time, the Casa Paderborn, and though the hospitaleros were not the same, the place felt the same : cheerful, welcoming and yet strict, as one could expect from a german-ran place.

The albergue was not yet opened, but they has let us drop our bags. We went to visit the city and get some drinks until they opened, which was the occasion to get to know each other a bit better. Dan was planning on becoming a priest after the camino, which was the first time I met an young, active believer on the camino, and even outside of it I cannot say when that last happened. Yet, he was relatable and friendly; not that there is any reason he shouldn’t have been, but being surrounded by non believers, atheists and other heathens can lead you to think that you can’t enjoy the company of a believer. Again, without reason. 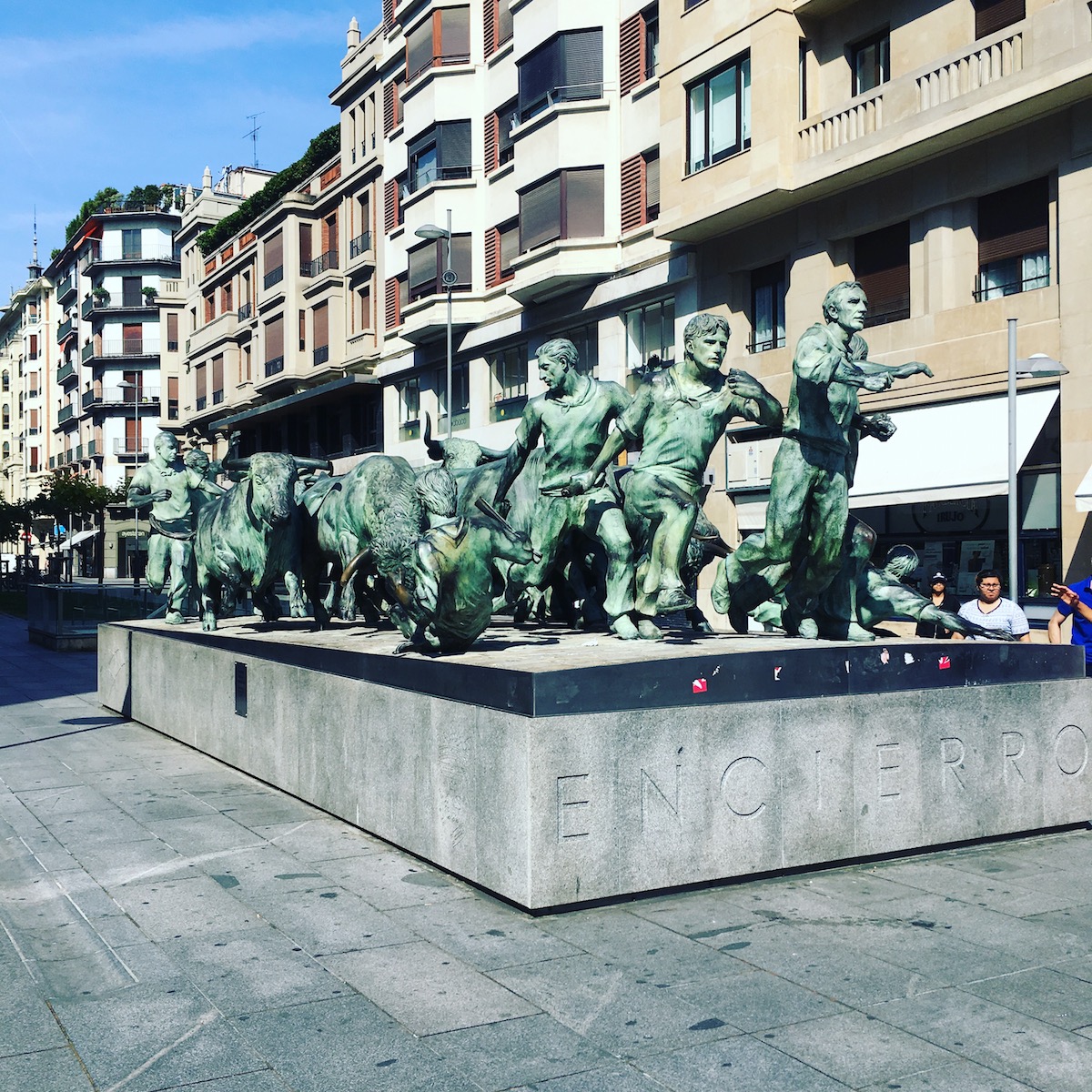 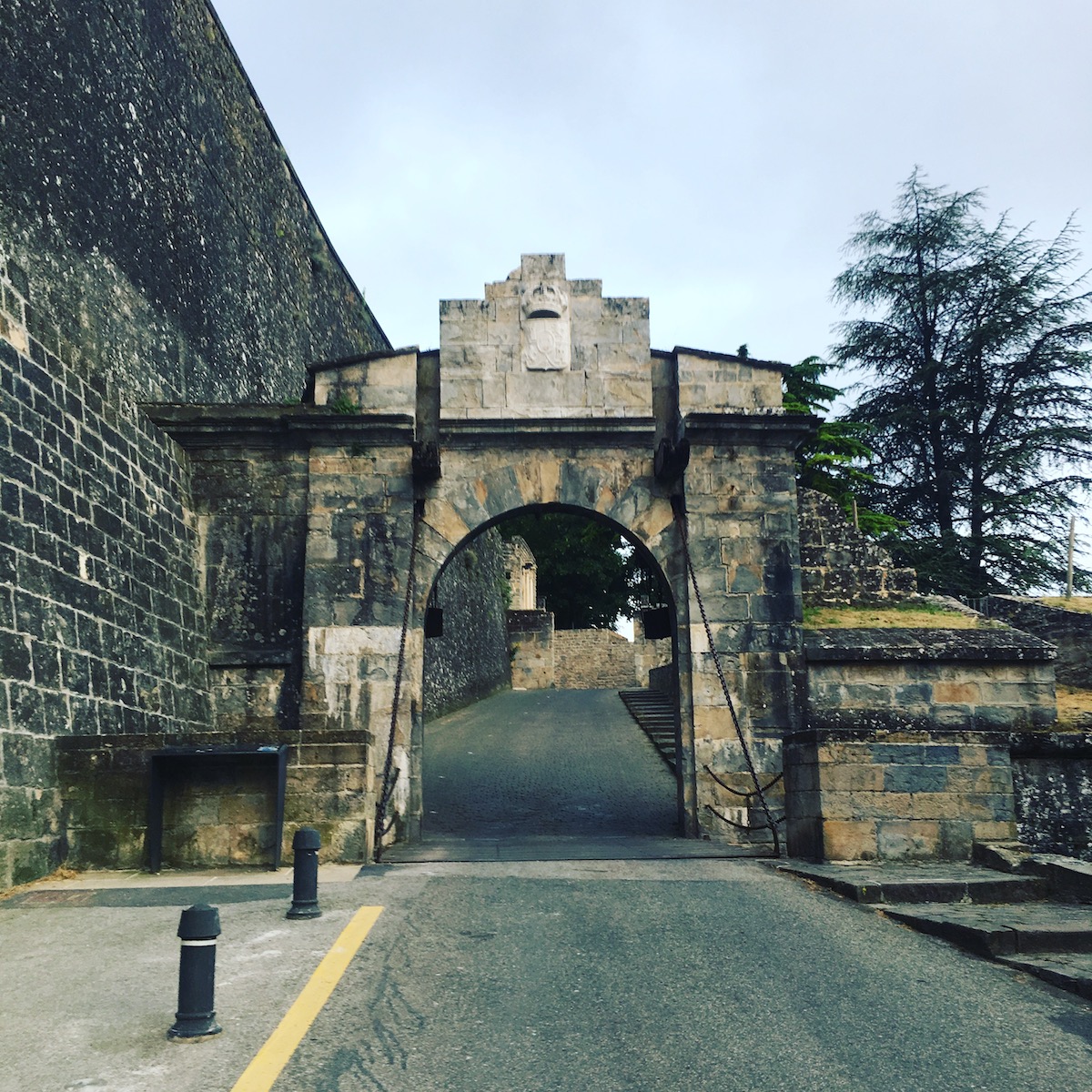 Sam had been working in Santiago for a couple of months and wanted to do the camino and travel before starting a new job in september; Claudia wanted to do the camino again, this time on her own; Patricia was enjoying some free time; and Aline wanted (needed?) some time to think over where her life was going. Also joining us at the table were Maria and Carmen, two sisters (Mexico), Sisse (Denmark) and Louise (Australia).

Once properly checked-in and after a siesta, we went tapas hopping again. Talks revolved around politics, drinking games, and the differences in dating in our respective cultures. We went through many places, but made sure to come back before curfew: one of the hospitalero has made it clear he would not be happy with late pilgrims!

Good news: finally waking up at 6am instead of 4am or 5am. Less good news: we were woken up by the hospitalero singing with is deep voice, which is not exactly the best way to get out of sleep, but well. At least it was 6am… We take our time and leave around 7am, and after a few banter I went on my own to do some fast-paced walking. 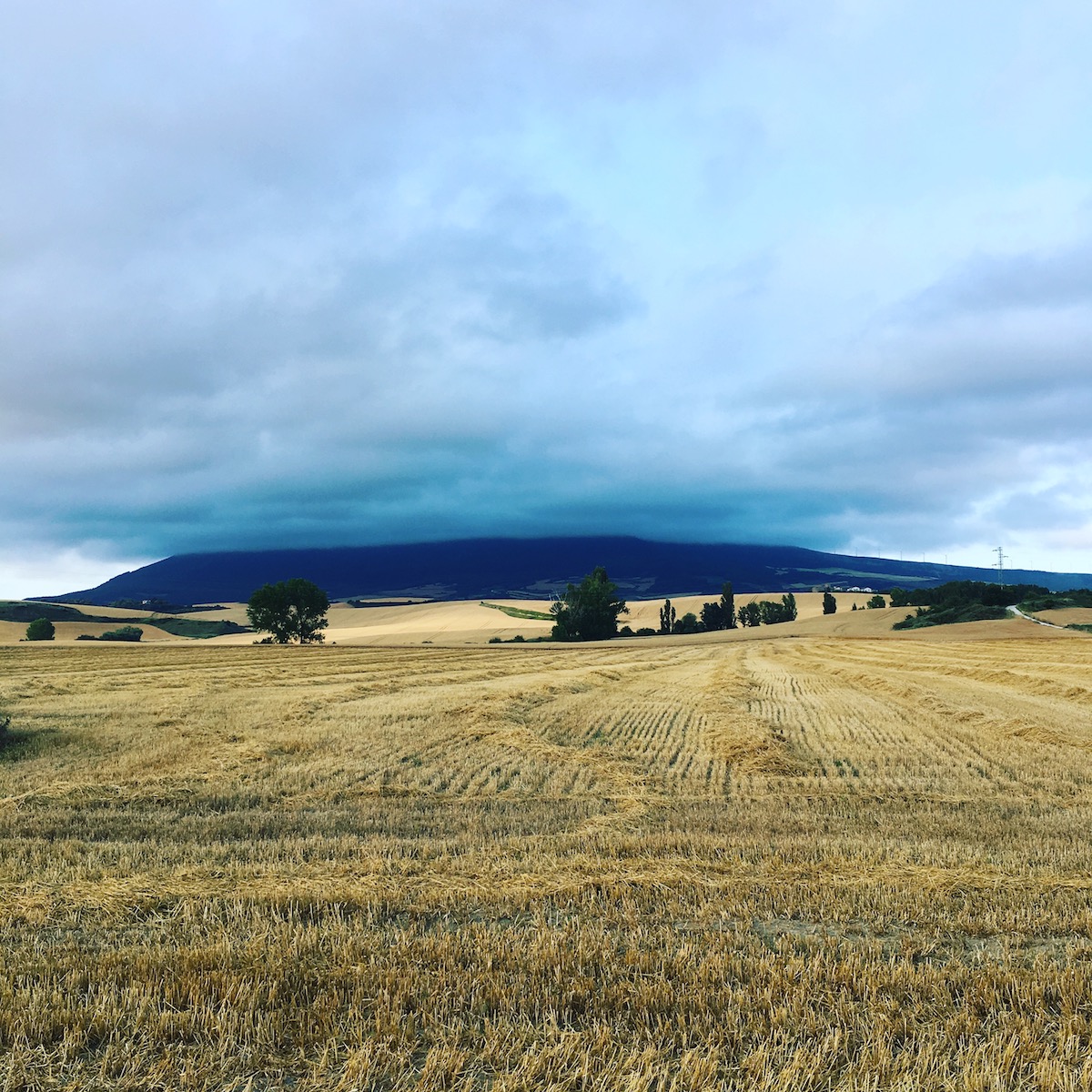 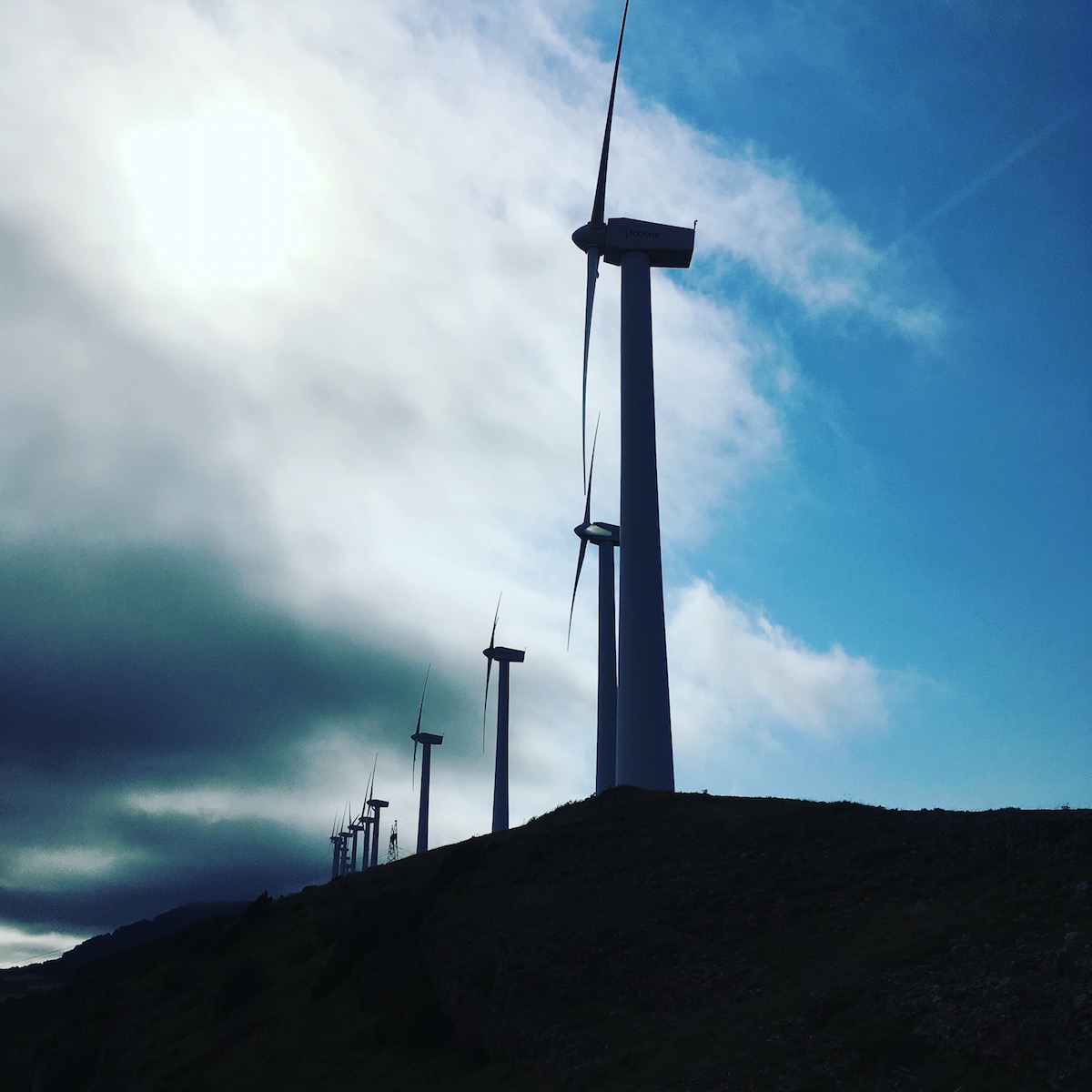 This path was the last unknown one for me, since everything after Puente la Reina would be déjà vu. Even though I was rushing through it, I enjoyed it a lot: the way took us in a little mountain chain called Sierra del Perdón, up to the Alto del Perdón at 770 meters high.

From there, it was all downhill until the entrance to Obanos, the town in which both caminos (aragonés and francés) merge. As soon as I was at the beginning of the steep entrance to the town, I was overflowed by a wave of memories and nostalgia, or the happy version of it. The last time, I remembered seeing a lot of pilgrims in Obanos; this time however, not so much. 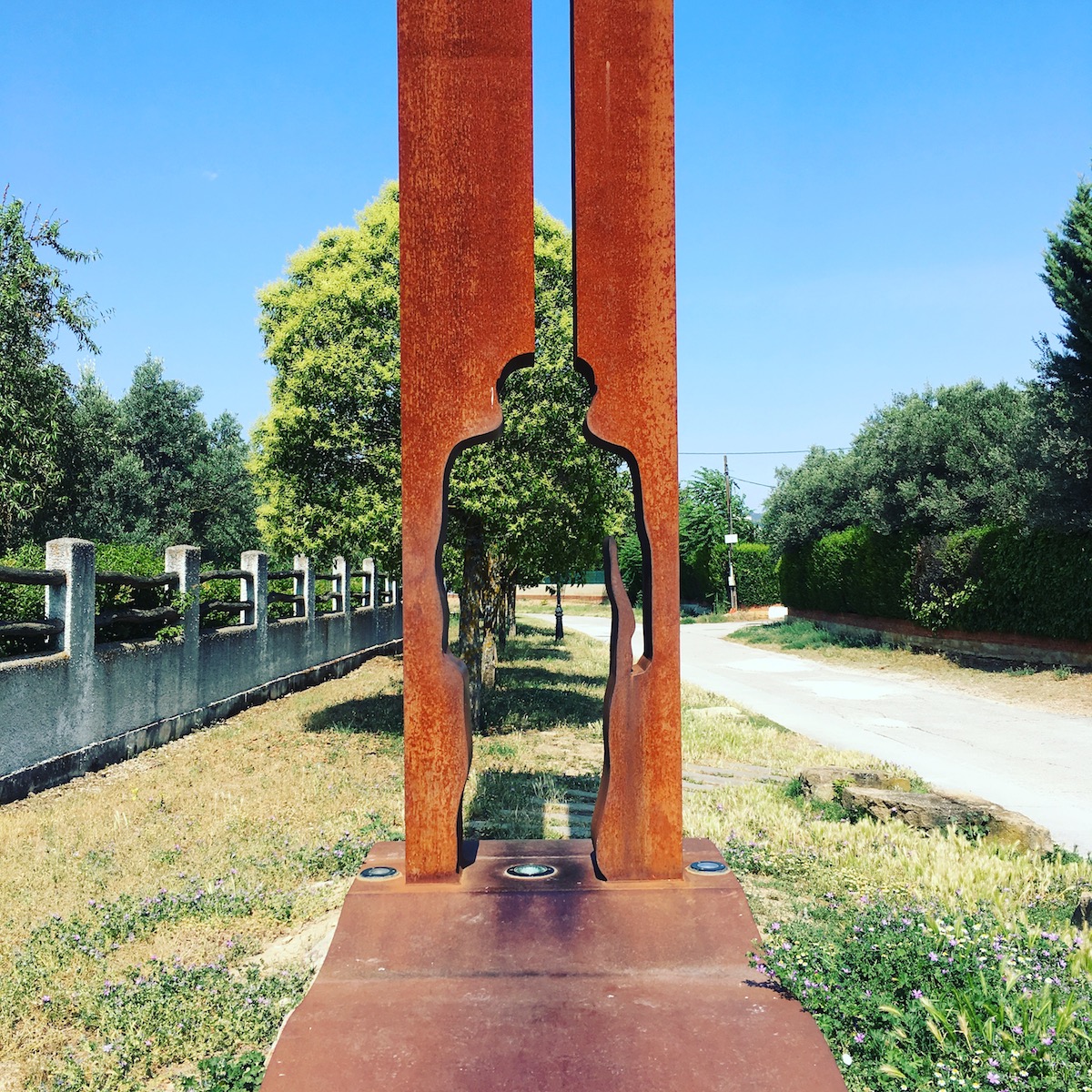 Even in Puente la Reina, less people than I’d have expected. Maybe I simply had gotten used to the large number of pilgrims. Once at the albergue, I recognized the lady in charge of checkins : it was the same than the last time! Obviously, she didn’t recognized me. I can’t even begin to guess how many faces she had seen during those few months…

The rest of the day went by as they all did, spent between beers, siestas, and dinner. After sharing some more wine in the backyard of the albergue, I realized that I had done the few missing days of my camino francès, my “original” mission for this trip.

Since I had a few more days of vacations, I briefly pondered stopping there and make yet another late minute amendment to my plans, such as doing the few days from Santiago to Fisterra; and just as quickly decided not to. I was having fun there, and I was enjoying the company: why cut it shorter that it needed to ? 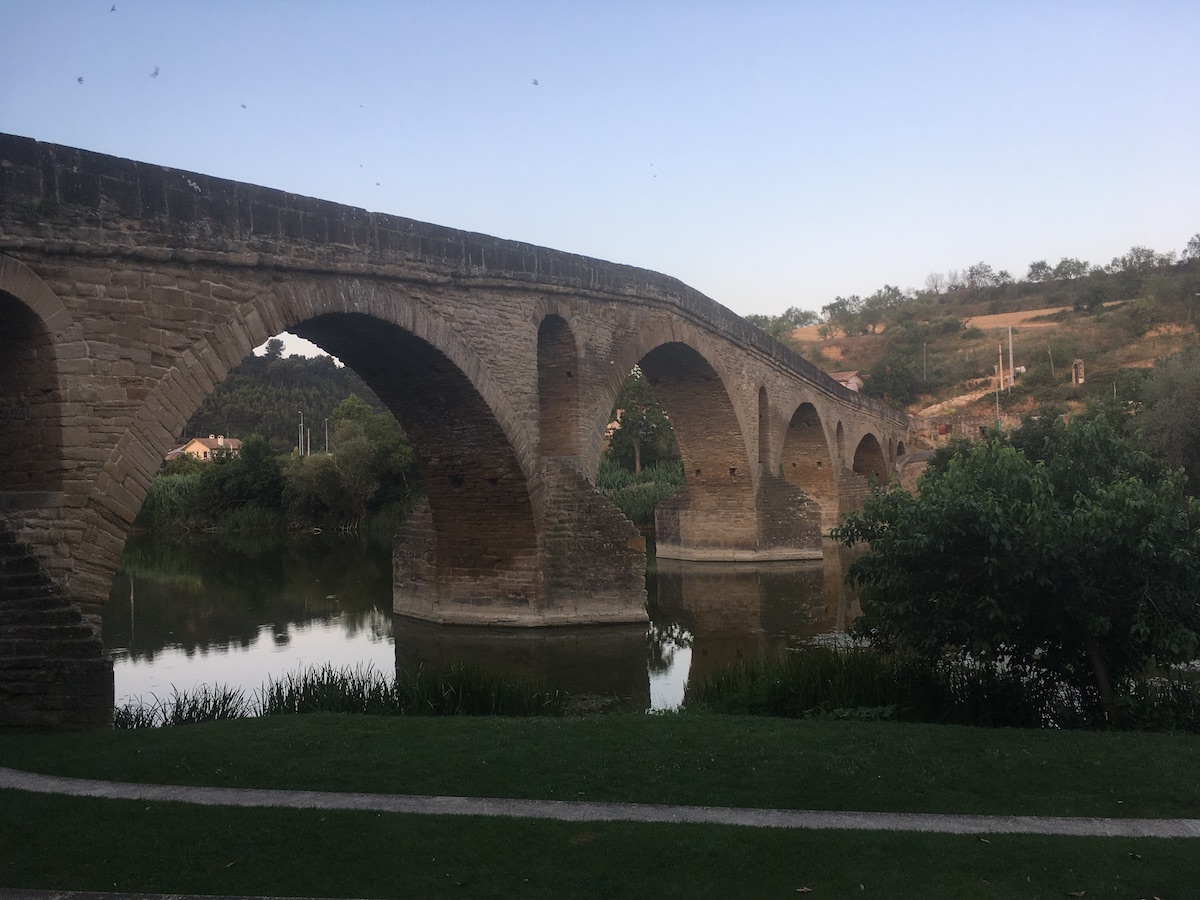